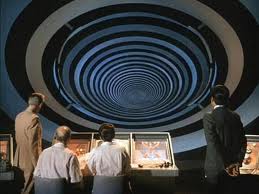 If you are a regular reader of The Horror Incorporated Project, you may have noticed that our titles have been getting a bit stale of late. It’s been a while since we’ve seen a new title from the Shock! and Son of Shock! packages, and as a result we’re getting the same films repeated over and over.

Of course, the show will eventually feature movies from outside the Shock! catalog, but at the moment we’re in the doldrums.

While it’s never a good idea to wish time away, I’ve decided to do just that.  I will post the next seven weeks of programs with previously published commentaries.  That will clear the decks for some movies we have not yet seen.

So in the next few days, expect a number of quick posts, essentially repeats of what I’ve posted in the past.  Then we’ll reconvene on the evening of Saturday, July 3, 1971.  That’s when our first film from the 1950s comes up on the schedule.

Hope to see you there.

This site uses Akismet to reduce spam. Learn how your comment data is processed.

Don’t Force Me To Summon My Badass Friends